a random complex Gaussian tensor, that is a vector of size

with i.i.d. standard complex Gaussian entries. for a subset

, we define the marginal

obtained by partial tracing the tensor legs belonging to

, the complementary set of

. Moreover, we allow for twisted marginals: for a permutation

permutes the tensor legs as follows:

We prove the following result.

Theorem 1 The set of

are asymptotically free as

. In other words, they jointly converge in distribution to a family of free standard free Poisson elements.

is a positive parameter (in our result,

). We display below the density (red curve) and numerical simulations for 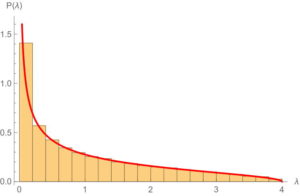 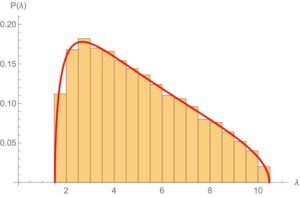 The message of our main theorem is that although the (overlapping) marginals are correlated random variables, their distributions become asymptotically free as the size of the individual Hilbert spaces grows to infinity.

denote, respectively, the four tensor factors above. It is natural to consider the joint distribution of the marginals

, which are not asymptotically free anymore:

are fixed, the marginals

have the following asymptotical free cumulants:

is an arbitrary word in the letters

is the number of different consecutive values of

), and not enough to ensure the asymptotical freeness. The natural framework to tackle such situations is that of freeness with amalgamation, and we shall study these cases in some future work.

@AlgebraUibk The shorturl is broken for me ☹️

Discussion is the only way out of the current situation. Love well and be strong twitter.com/startrekcbs/st…

Great answer from user Christopher Ryba; now I just have to read the relevant papers...