In this short post, I would like to discuss a special case of the construction introduced in the first part of the series, that is compute the set

is the anti-symmetric subspace of the tensor product. This example plays an important role in the additivity problem for the minimum output entropy of quantum channels, as it was shown in [ghp].

form a basis of

be the orthogonal projection on the subspace

. It is easy to see that

and it looks as below ( 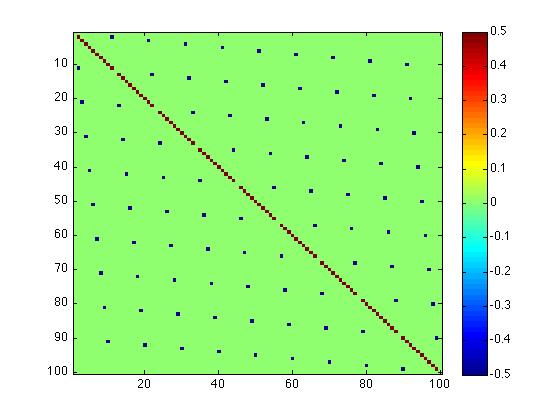 Via the usual isomorphism

complex coordinates of the tensor in an

matrix, respecting the ordering of bases. Note that in this way we obtain antisymmetric (

2. Singular values of vectors in the antisymmetric subspace

The matrix in the middle has either diagonal blocks of size 2, as shown, or null diagonal elements. Hence, the non-zero eigenvalues of an antisymmetric matrix come in pairs

. Since antisymmetric matrices are normal, their singular values are just the moduli of the eigenvalues, so non-zero singular values have multiplicity at least 2. We conclude that

Actually, it is easy to see we have equality, since the vector

is a unit norm element of

. We summarize everything in the following theorem, where

Theorem 1. The set of all possible singular values of antisymmetric vectors inside

In particular, the set

is convex and we have that

. Hence, the minimum entropy of a vector inside

[ghp] A. Grudka, M. Horodecki and L. Pankowski. Constructive counterexamples to the additivity of the minimum output Rényi entropy of quantum channels for all

@AlgebraUibk The shorturl is broken for me ☹️

Discussion is the only way out of the current situation. Love well and be strong twitter.com/startrekcbs/st…

Great answer from user Christopher Ryba; now I just have to read the relevant papers...